MET ONE pioneered the concept of packaging an optical particle counter into a handheld instrument almost 20 years ago and since that time the technologies now available in our increasingly connected, mobile world have enabled enormous opportunity where saving time and money is of real customer value. Contamination sensitive manufacturing environments can be found in increasingly diverse industries and in many cases a handheld particle counter has proven to be a useful tool. From medical devices to microelectronics, from aerospace to optics, contamination control professionals routinely make use of handheld particle counters for periodic contamination monitoring and troubleshooting within high cleanliness manufacturing and process environments. Industries that use handheld particle counters can be classified into three distinct categories, each with distinct needs.

What are Handheld Particle Counters used for?

There are three primary applications categories for air particle counters which include handheld models.

ISO 14644-1, Cleanrooms and associated controlled environments—Part 1: Classification of air cleanliness, is a standard for designating the classification of airborne particulate cleanliness within a cleanroom or clean zone. The table below, reproduced from ISO 14644-1, shows how airborne particulate cleanliness is described as the number of particles, of size greater than a specific value, in a fixed volume of air expressed as a concentration.

The ISO 14644-1 limits are expressed in particles/m3 of air. However it is not necessary to actually sample a full cubic meter for routine monitoring and troubleshooting, even in the case of annual or bi-annual re-classification of the cleanroom. However it should be noted that for classification, ISO 14644-1 does specify minimum sample volumes.

The minimum sample volume, Vs, for each sampling location can be determined by using the following equation.

For illustration, to classify a cleanroom, for example to ISO Class 5 at 0.5 μm, we would need to consider the sample volume of air required to be sampled to ensure that 20 actual particles would likely be detected if the particle concentration was at the class limit for 0.5 μm.

Handheld particle counters generally sample at 0.1 cubic feet per minute which is 2.837 liters per minute. Therefore in the above example, a two (2) minute samples would achieve the required sample volume, which for a small number of sample locations is not a huge sampling burden.

The typical electronics facilities engineer task is non-routine in nature often "fire-fighting" particle contamination based problems. While a high sensitivity 0.1 μm portable particle counter is generally needed for routine monitoring and HEPA filter leak scanning, the light weight and convenience of a handheld particle counter is a perfect tool for troubleshooting activities. These engineers generally opt for a full featured 6-channel, 0.3um handheld hand held particle counter. Typically, the handheld is very often left in the cleanroom but the engineer needs to get the data into a computer off line for further analysis. Features that make it easy to get the data out of the cleanroom are very useful here. For contamination profiling studies, having the capability of displaying particle count data as a graphical trend chart, such as the MET ONE HHPC 6+ allows the defect-reduction engineer to spot particle transients and contamination trends quickly.

Due to the common requirement that equipment must be wiped down in transfer locks prior to being brought into such cleanrooms, it is not at all uncommon that Handheld Particle Counters are left on charge in the cleanroom. The MET ONE charging cradle provides a convenient way to access the data over the Ethernet network as well as helping to ensure that the device is always fully charged and ready for use. Plug and play solutions where no utility software or special drivers are required are a plus.

There are many high end manufacturing segments where particle contamination control is critical to product quality. Examples include optical assembly and components, aerospace, automotive, MEMS, MOEMS, print head assemblies etc. These segments generally have much smaller clean rooms or controlled environments than found in semiconductor, flat-panel-display and hard disk manufacturing industries. Particle counting applications in this segment are generally less concerned with process troubleshooting and are more likely to use a handheld particle counter as an affordable option for a routine sampling plan at a relatively small number of locations, or simply for conducting the annual re-certification of a small cleanroom to ISO-14644-1. Laminar Airflow Cabinet (LAF) HEPA filter leak checking to 0.3um is a common application here and users frequently choose the MET ONE HHPC 3+, 0.3μm version as a good compromise between price and performance. 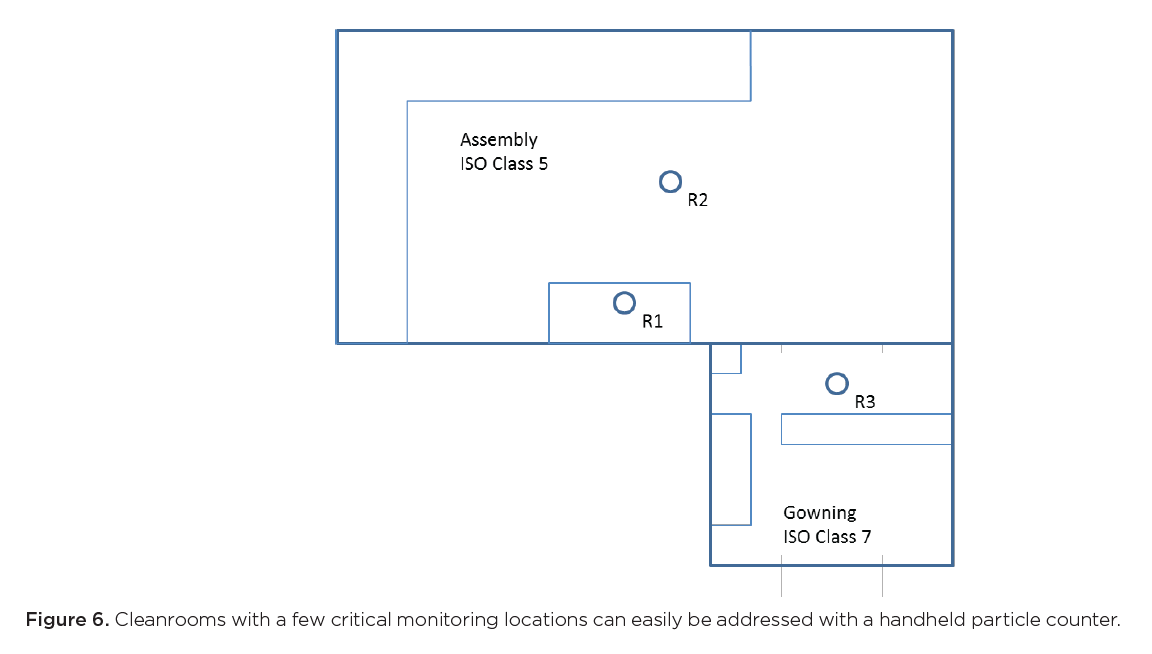 Less sensitive manufacturing environments where particle troubleshooting is not routinely performed are more concerned with getting round a fixed sampling schedule efficiently. Regulated and semi-regulated production environments that adhere to a Good Manufacturing Practice (GMP) principles such as aseptically packaged food and beverage filling lines, hospitals, formulating pharmacies and medical device manufacturers often use handheld Particle Counters as an affordable tool for the routine monitoring of HEPA filtered controlled environments to ISO 14644 Cleanroom classifications.

Users of Handheld Particle Counters in GMP applications generally do not need 0.3 μm sensitivity; often monitoring weekly at 0.5 μm and 5.0 μm in ISO Class 5 or Class 7 clean rooms, clean zones, or Laminar Airflow Cabinets (LAF). Sampling typically takes the form of 3 x 1 or 2 minute samples performed weekly as a quality assurance measure with the MET ONE HHPC 2+ being a perfect choice here. Some GMP controlled segments also monitor to 1.0um as this size is also in the ISO 14644-1 specification. Although the choice of sizes to monitor is optional, users requiring monitoring at all three specified sizes of 0.5 μm, 1.0 μm and 5.0 μm would choose the MET ONE HHPC 3+, 0.5 μm version.

Some users in GMP controlled environments also wish to manage particle count data in a secure way, compliant to the guidelines contained within 21 CFR Part 11. Administrator controlled instrument configuration, user log on and secure (locked) spreadsheet output files are further features to take into consideration for users monitoring within a GMP context.